My wife and I play together a lot, but she’s not one to be huddled on a desk and a monitor. No, she wants to play from her couch, but she also recognizes that the PC is where the games are best and where most co-op titles live. To help keep her comfortable while she builds, kills, and plays, we bought her a basic food tray with feet that she’s been using as a mouse and keyboard surface for some time. It’s not great, and that means we have a wire with a little USB hub for all of his peripherals lying around. Visiting friends, it pains me to see how they use a mouse and keyboard in the living room. They are often hunched over a low table, leaning down and then complaining about how their backs and legs hurt afterwards. Otherwise, they will try to balance it on their knees. When I spotted the Couchmaster Cycon 2 I thought it might be a great replacement specifically designed for my wife’s crappy little tray, and put an end to the front and shoulder pain my friends were dealing with. . We’ve been using it for a few weeks now, so let’s dig deeper into what we found.

When the Cycon 2 arrived I was surprised at how small the package was. The foam is tightly packed into a vacuum sealed bag, much like a memory foam pillow. Taking it out of the bag and letting it expand over the next 24 hours brought them to life, expanding them to their full dimensions of 6.25″ x 7.5″ x 23″.

The Cycon 2’s biggest appeal comes from the desktop. With an overall width of 33 inches and a height of 13 inches, there’s more than enough room for a full-size keyboard, a large mouse pad (although a smaller sticky pad is included), and a mouse. wired. The surface of the desk is smooth and as such my mouse sometimes lost tracking – I’d recommend a full-width neoprene mouse pad to make sure nothing moves. The board itself is 1.5 inches thick at its widest point, which seems like a good balance between being so thick it’s too heavy and too thin to be strong. I’m sure a lot of iterations have happened here, and what’s left is strong and light.

I was happy to see that the microsuede exterior of the cushions can be unzipped and removed. It’s handy if you happen to spill something on it, but since this thing is very comfortable to lean on, you’ll just want to do it periodically just for practice. In our case, our dogs also like to snuggle next to Laura while she plays, so getting the dog hair and funk off is a must. Kudos to Nerdytec for recognizing this and putting large zippers on the cushions to make it easier. 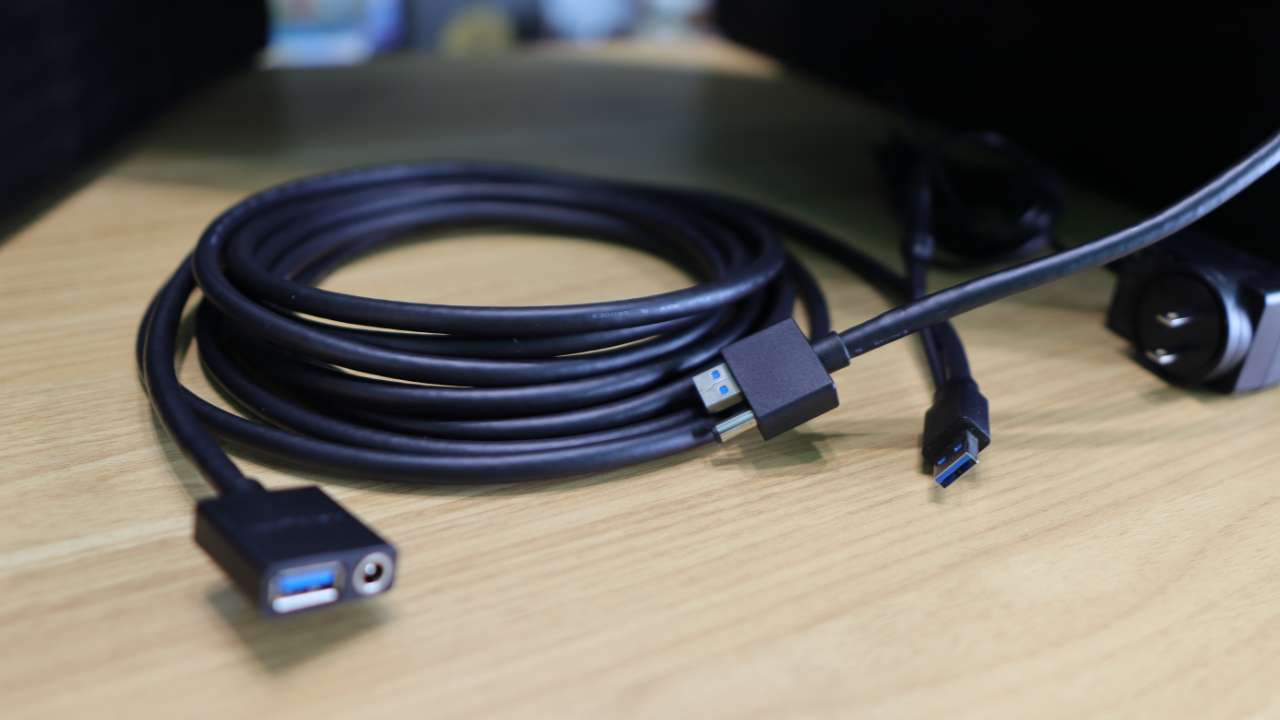 I expected the Cycon 2 to have USB capabilities, but I was very surprised to see not only that they are USB 3.0, but there are six of them! There are two panels (which are secured with a plastic screw – two are included in case you lose them) on the underside to reach the four that reside inside the desk.

There are cable management holes on the top and sides of the desk, with cable management inside to prevent cords from getting tangled. Unfortunately, these ports are slightly too small for the Ferrite Core bead on my laptop, so I was unable to run my laptop’s PSU through the desktop. My wife’s laptop had a similar problem. This seems to be something that should have been picked up during testing, as many devices have quite thick cable ends. The included docs suggest you can route the cord through the sides, but that doesn’t take into account the size of the cord itself coming out the top to reach the back of the laptop. 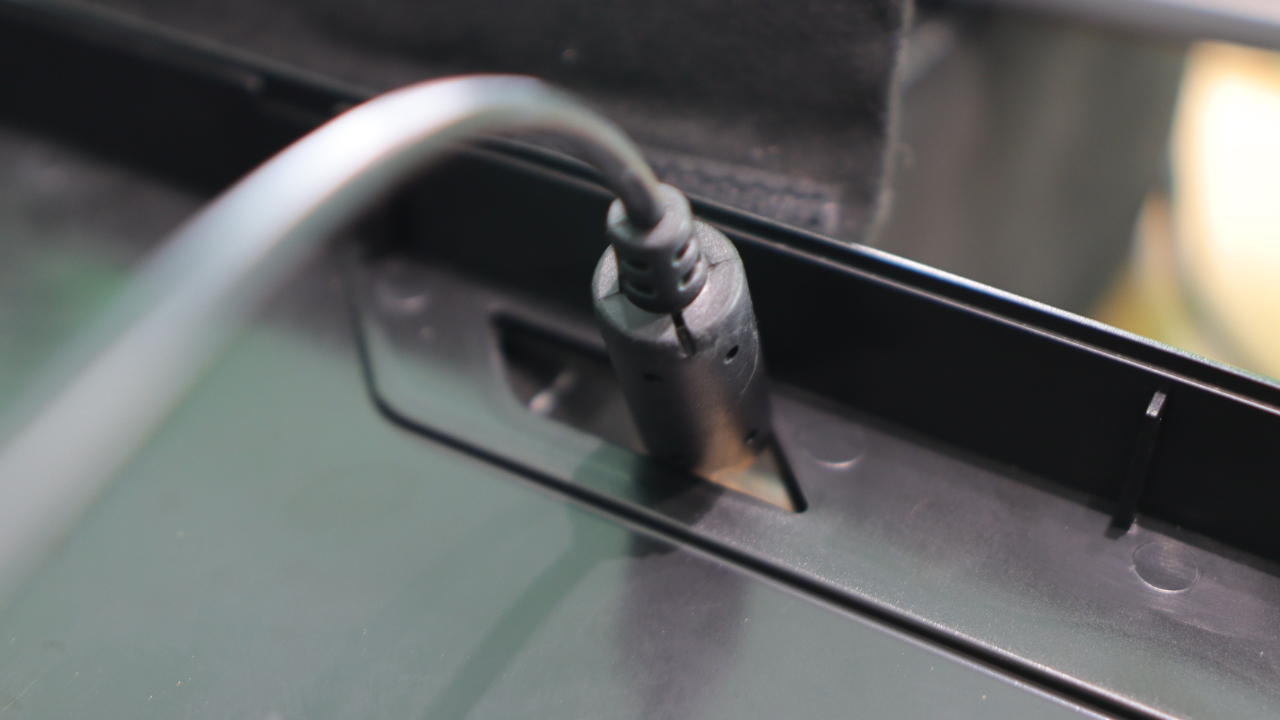 The desk has six USB 3.0 ports: two on the top and four inside. Simply remove the panels attached to the bottom of the desk and connect your keyboard and mouse to the internal USB ports. There are cable grommets on the top and sides, and cable management posts inside to keep your cords from getting tangled. The best use case for the Cycon 2 is to designate a keyboard and mouse that will be semi-permanently tied to this board, wrap the cables underneath, and leave it that way. It will keep your cable cobras fully tamed so you can just pick up and play.

There’s one thing that’s very true about the Cycon 2: it’s incredibly comfortable. Resting your arms on the pad while you play relieves pressure on your shoulders and back, leaving you with a relaxed natural angle for longer gaming sessions. If you’ve ever experienced a tension headache after a long day of gaming, chances are your shoulders tensed up to hold your arms in a specific position for too long. The Cycon 2 expertly eliminates this in the most comfortable way.

Funny enough, one of the things that makes the Couchmaster Cycon 2 flexible is the very thing that makes it rather bulky. You can apply the provided velcro strips to give the table more grip on the cushions, but they do not attach. Adding weight to the desk with a keyboard, mouse, and other peripherals adds enough weight to keep the table from moving too much, but they don’t tie together into a single unit that you can pick up and move around. On the other hand, the fact of having three distinct parts facilitates storage, even if it remains cumbersome.

The under-desk cable management is useful for routing cables for out-of-the-way storage, but they don’t have any sort of rounded ridge on the top to keep cables from sliding off the top of the post. In our testing, this meant that our wired mouse had to be “stuffed” into the gap a bit, then quickly tucked under the plate before the cable could come undone. 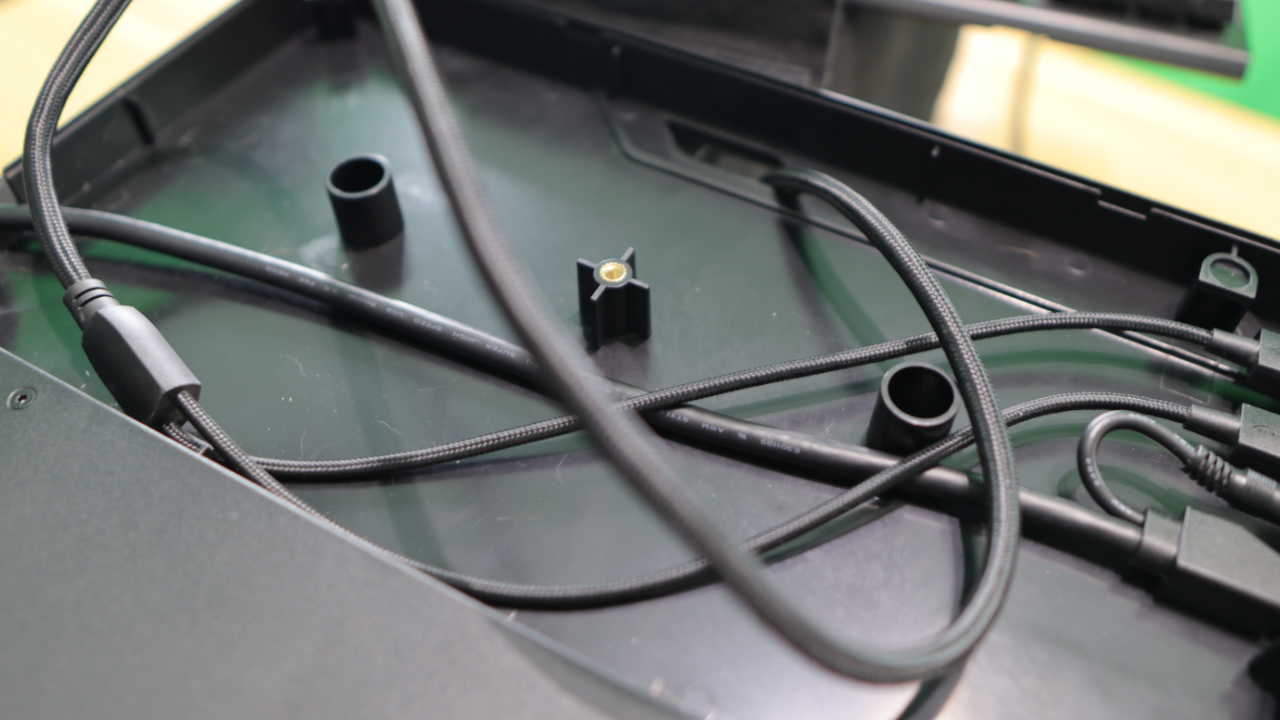 Speaking of storage, the Cycon 2 has a few other tricks up its sleeve. On one of the cushions there are two pockets – one wide and one mesh. Obviously you’re free to use them however you see fit, but I find it a great place to store my mouse, a spare set of batteries and my PS5 controller. Attached to the front of the desk is another pouch that could easily fit a mouse, although neither place could fit my wife’s vertical mouse. This could easily be used for remotes, USB dongles, cables or even a drink, although I’d suggest using something with a cap on it. That said, they do a great job holding my phone while it charges. 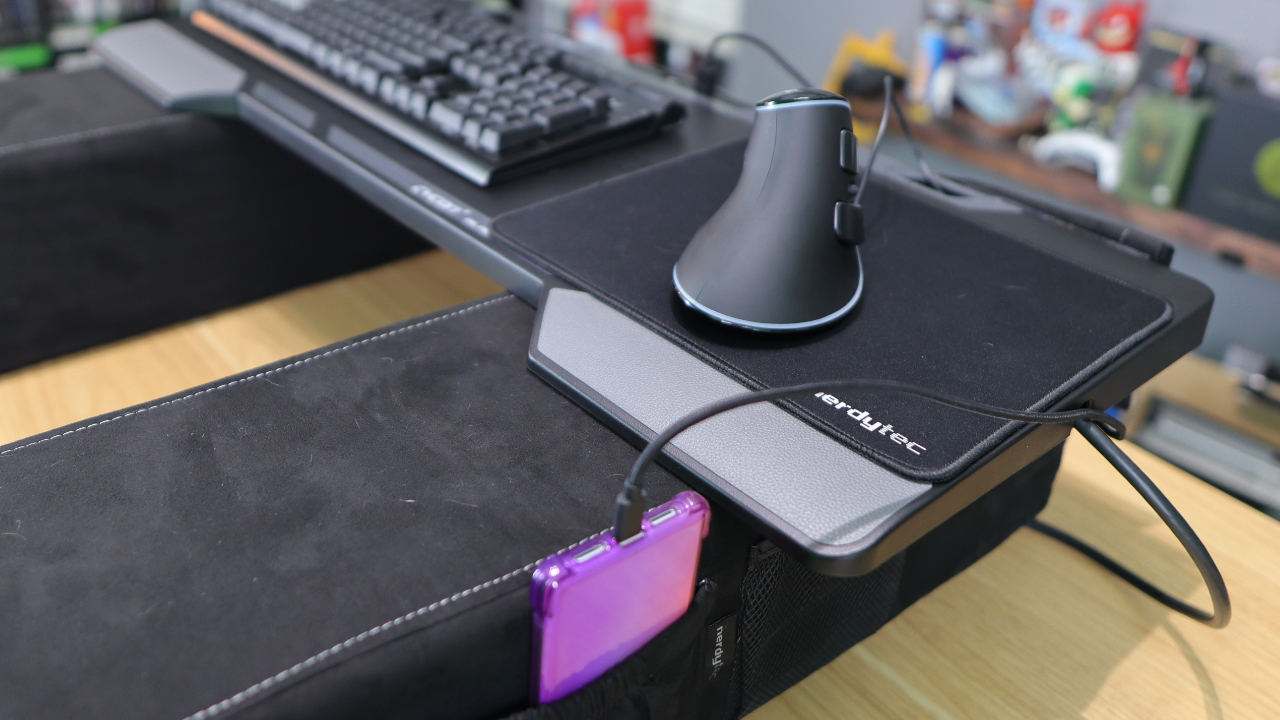 A single, specially designed cable connects the Couchmaster to your PC (or console) and an optional included power supply. The extra power lets you charge your phone or other devices with either of the two top-mounted USB ports, or you can skip the extra power and just use the USB ports for data if you’re inclined. This proprietary cable is about 15 feet long, so you’ll be able to sit quite far from your TV.

There are a few areas where the Cycon 2 would benefit from a potential overhaul. There’s little to no breathability on the surface, which can be an issue for devices with fans at the bottom like a laptop. Sitting on the desk, my laptop reflected a large amount of heat, causing the fans to spin tirelessly until the device was warm to the touch. Some grooves cut across the desk, or even a low-speed fan would go a long way in keeping the device cool. Maybe we’ll see something like this on the Cycon 3? 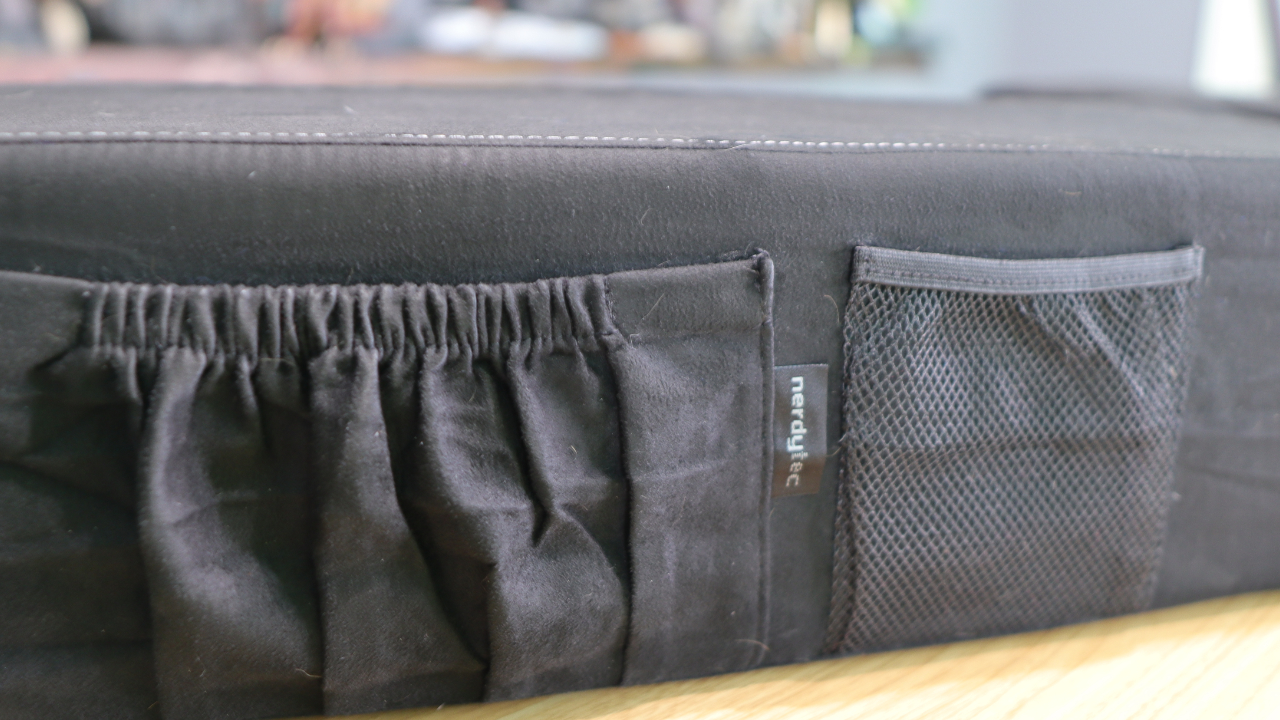 Likewise, there are no edges on the Cycon 2, so your mouse can slip if your wrist on the back of the board extends past it. A simple 2mm lip on the edge all around would go a long way in keeping things on the board, so put that on the Cycon 3 list. need an extension cable as there is no aux port on the Cycon 2. Some of my best headphones are 3.5mm analog so it feels a bit like a dud. . Developer Nerdytec also sells a phone stand, a tablet stand, a large mouse pad and, disconcertingly, an ashtray. I don’t know how much appeal there is for the latter, but I guess it’s an option?

There are other devices similar to the Cycon 2 – the Roccat Sova comes to mind, for example. The Sova has a built-in keyboard, but without the pillows of the Cycon 2, it should rest directly on your lap. The built-in keyboard also makes it difficult to use on a laptop, so I think the point goes to Nerdytec on this one.

One final suggestion for developer Nerdytec is to try and find a way to bring this device back to the $150 price point. The Cycon 2 is $179, and it costs around $30.

While not strictly necessary, the six powered USB connections, along with a 15-foot cable, make this the best way to enjoy PC gaming on the couch. There are a few suggestions to improve it for the next review, but not enough to dissuade me from suggesting you check it out.

Ron Burke is the editor of Gaming Trend. Currently living in Fort Worth, TX, Ron is an old school gamer who loves CRPGs, action/adventure, platformers, music games and recently got into tabletop games. Ron is also a fourth-degree black belt, with a master’s rank in Matsumura Seito Shōrin-ryū, Moo Duk Kwan Tang Soo Do, Universal Tang Soo Do Alliance, and International Tang Soo Do Federation. He also ranks in several other styles in his search for an all-around fighter. Ron has been married to Gaming Trends Editor Laura Burke for 21 years. They have three dogs – Pazuzu (Irish Terrier), Atë and Calliope (both Australian Kelpie/Pit Bull mixes).